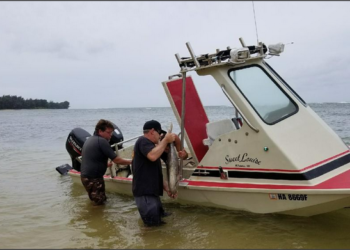 Hanalei restaurant owner Gregg Fraser has partnered with local fisherman to bring in seafood to serve for free to those in the area.

Flood relief efforts are still in full force in Hanalei, with the hospitality industry at the helm.

Gregg Fraser, the executive director of the Hawaii Restaurant Association who also owns a restaurant in Hanalei, Kauai, has kept his business operating in order to give the community “a sense of normalcy,” though he is worried about the future of his business.

“We’ve been trying to help out and feed people, as well as be a shelter and a community center to give information,” Fraser told Pacific Business News. “But I’m also trying to avoid bankruptcy.”

Fraser, who opened Opakapaka Grill and Bar just eight months ago, is not the only one to consider bankruptcy in the wake of last weekend’s storm. Dean Okimoto, owner of Nalo Farms, considered shutting down after he found his family farm, and livelihood, under four feet of water. In lieu of shutting down, he started a GoFundMe campaign that has since raised about 85 percent of its $100,000 goal.

Though Fraser’s restaurant sustained very minimal damage from the flood, it has been bringing in little to no income in the past week.

“We relied on the tourism industry. Our business was 80 percent tourists, and they have all been evacuated,” Fraser said, adding that he expects the lack of business to continue as the road past Hanalei may remain closed for months. “Yet we feel the need to stay open as a community center, and so I can pay my employees.”

Fraser has been serving meals for free to those in the area, and has partnered with local fisherman to bring in seafood. He is also in talks with the Department of Education to turn the restaurant into a makeshift classroom for children in the area unable to attend school.

“This isn’t about me, I’m doing this because I want to help, but I’m personally losing $200,000 a month, and I’m hoping there will be some relief in the future so I can stay open,” Fraser said.

Hanalei Colony Resort located next to the restaurant sustained more damage, and will not be accepting guests for at least two more months. Fraser added that the restaurants hit the hardest are those on the Hanalei River.

Tahiti Nui, an eatery located on the road into Hanalei known for its appearance in The Descendants, has joined Opakapaka Grill in serving food to the community.

The restaurant sustained minimal damage, and was only closed for the duration of the storm, according to bartender Leah Gross.

“We’ve been a holding center for donations, and we have been cooking meals for the Red Cross, the National Guard and everyone working to clean up the area,” Gross said.

Koloa Landing Resort in Poipu is hosting an event Friday called “Choy of Cooking: Ginger on the Lawn,” featuring Chef Sam Choy and Executive Chef Shaun Hinson. The food demonstration event will give a portion of proceeds to flood relief efforts.