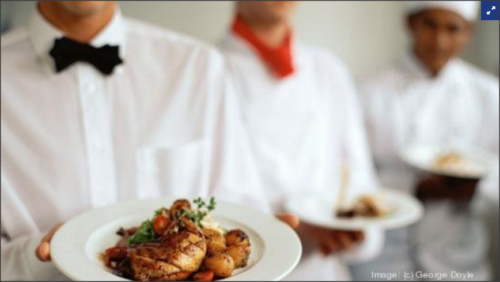 Hawaii restaurants are opposing a bill that would require paid sick leave for minimum wage employees, claiming it will lead to rising labor costs and ultimately result in shuttered doors.

Hawaii restaurants are opposing a bill that would require paid sick leave for minimum wage employees, claiming it will lead to rising labor costs and ultimately result in shuttered doors.

A hearing on the bill, which was also introduced last year, was held Tuesday in front of the labor committee, which recommended the bill be passed with amendments.

House Bill 1727 intends to improve the lives of Hawaii’s employees and lower health care costs; however, it may have unintended consequences.

Gregg Fraser, the executive director of the Hawaii Restaurant Association, said this mandate would add thousands of dollars to an operator’s expenses, and would cause restaurants to lay off employees and raise menu prices, or close down.

“I do sympathize with those employees that are sick and can’t come to work, but paid sick leave needs to be an option for the restaurant. You can’t mandate a benefit,” Fraser said. “We are stacking hardships on restaurants right now.”

The bill, which is sponsored by Reps. Aaron Johanson, Daniel Holt, Linda Ichiyama and Kyle Yamashita, would allot one hour of paid sick leave for every 40 hours worked, with a cap of 40 hours per year. This would be required for all minimum wage employees who work more than 680 hours per year, or 13 hours per week.

Fraser said the sick days will be taken advantage of and misused by restaurant employees.

“The concept of ‘use it or lose it’ creates the feeling that employees are entitled to use that benefit whether they are sick or not,” Fraser said. “In addition to that, every time someone calls out sick, a manger has to scramble to find a replacement in four hours. Most of the time, restaurants don’t have enough employees to begin with, so they use an employee who has worked 40 hours already, so restaurants would be paying a person to take the day off, and pay the person time and a half to replace them.”

IL Gelato Owner Dirk Koeppenkastrop testified against the bill, saying it is a threat to the company, which employs 50 individuals.

“Our industry has faced tremendous cost increases these past few years from mandated wage increases along with spiraling prepaid medical insurance premiums where the businesses cover almost all of the premium costs,” Koeppenkastrop said. “We cannot increase our scoop prices, as we would lose our local customers. If payroll continues to increase so substantially we would need to close our business, and we could no longer offer entry-level jobs to young people.”

At the beginning of the year, Hawaii’s minimum wage increased to $10.10 per hour, the final increase since the law was passed in 2014, intending to better support nearly 51,000 Hawaii employees. Another recently introduced bill – Senate Bill 2291 – would continue to increase the minimum wage, further exacerbating labor costs for restaurants.

“At the same time that we are talking about mandatory paid sick leave, we are also talking about raising the minimum wage. How do people expect restaurants to stay in business?” Fraser said. “Most restaurants are already struggling with their labor costs, and adding these bills will be the nail in the coffin.”

The bill is also opposed by Tiki’s Bar and Grill and the Retail Merchants of Hawaii.

Among those in favor of HB1727 is the Hawaii Government Employees Association, the Hawaii State AFL-CIO and the International Brotherhood of Electrical Workers Local Union 1260.

“While IBEW1260 members are fortunate enough to be covered by a collective bargaining agreement providing in many cases generous amounts of paid sick leave, many of Hawaii’s workers, over 40 percent, are not afforded the same benefit,” Michael Brittain, IBEW1260’s assistant business manager, said in his testimony. “As a result, these workers are required to choose between providing for their families or working while sick and enduring a loss of income to recuperate.”

More hearings are still to come on HB1727 and SB2291 when they crossover to the Senate and House, respectively.