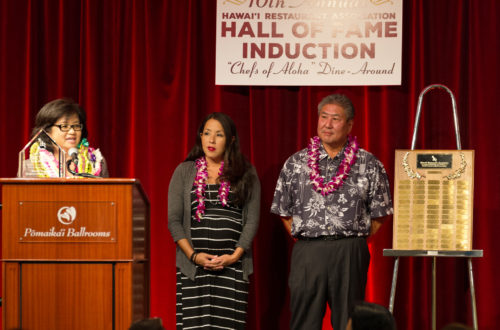 The event also included a “Chefs of Aloha” Dine-Around that featured guest Chefs (see attached for complete list of guest Chefs) from the past nine (9) years of Hall of Fame dinners preparing exquisite dishes for all attendees.

The formal Hall of Fame Inductee ceremony began at 7:30 p.m. with the following individuals being inducted into the HRA’s 2016 Hall of Fame:

The inductees as well as the legacy winners were individuals and/or company’s that have demonstrated dedication and commitment to the growth of the restaurant and food service industry in Hawaii, contributed to the enhancement of its quality and image, and demonstrated service through outreach.

For the past 50 years, Zippy’s has followed Frances and Charles Higa’s core business values of commitment, serving with honorable intentions and uncompromising integrity, taking care of people, recognizing the unlimited potential in people and opportunities, taking risks and being willing to change and think long term. Whether it’s a Zip Pac before heading to the beach, a bucket of chicken for a potluck or some oxtail soup after a long night out the next stop will always be Zippy’s.

After 70 years in Hawaii, the Aloha Shoyu `ohana continues to emphasize the core Hawaiian values of kindness, unity, humility, and perseverance. For over seven decades, Aloha Shoyu Company continues to bring its unique products to kitchens all over the world, so that every dish can be served with a little aloha.

Proceeds from this year’s event will benefit the HRA Scholarship Program at the University of Hawaii Community Colleges.

About The Hawaii Restaurant Association

Chefs from the past 9 years for the evening Dine Around included: